I am pleased to announce the publication of Ninja Baseball Blast, aka Fuzzy Baseball #2. I had to create a new team of opponents for the Fuzzies to play in the sequel to my graphic novel Fuzzy Baseball, and I thought it would be fun if they faced a team of baseball ninjas*. 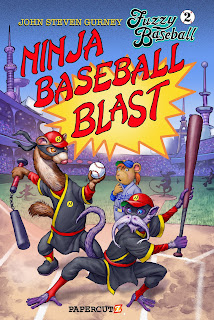 On the surface, the story is about a bit of cross-cultural confusion. There are rumors that baseball played in the Manga Leagueis different, that the players “over there” have secret wisdom and ancient baseball knowledge. Bo Grizzly dismisses this as nonsense and arranges an away game with the Sashimi City Ninjas. Bo insists that “Baseball is baseball” and that there is no difference. Blossom Honey Possum is the only one who orders a book that can teach them the Manga League rules.

The Fuzzies travel to Sashimi City for the big game, and on the surface, the rules seem the same. Bo Grizzly’s advice for his team to play their own way seems to be working. But the Ninjas assume, correctly, that the Fuzzies won’t take the time to understand one major difference (the use of the MORFO BALL). The Ninjas use this to their advantage. It’s generally a safe bet that Americans might not take the time to understand all the cultural differences while traveling abroad. 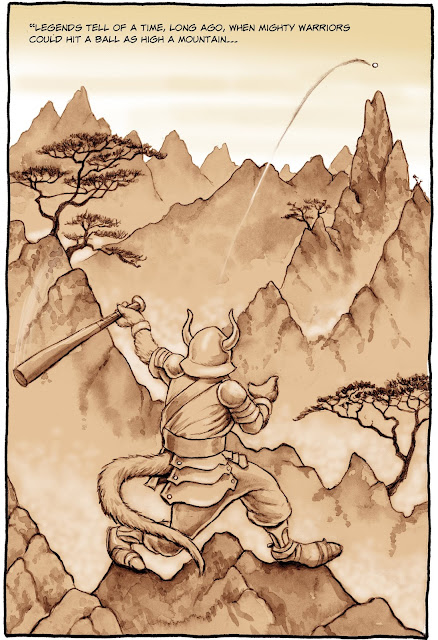 Baseball was introduced to Japan from America around 1870. In Ninja Baseball BlastI wanted to celebrate many of the fun things that our culture has imported from Japan. The Fuzzies meet ninjas, try sushi, learn from a manga style textbook, and even encounter a giant kaiju (Godzilla is an example of a famous kaiju). 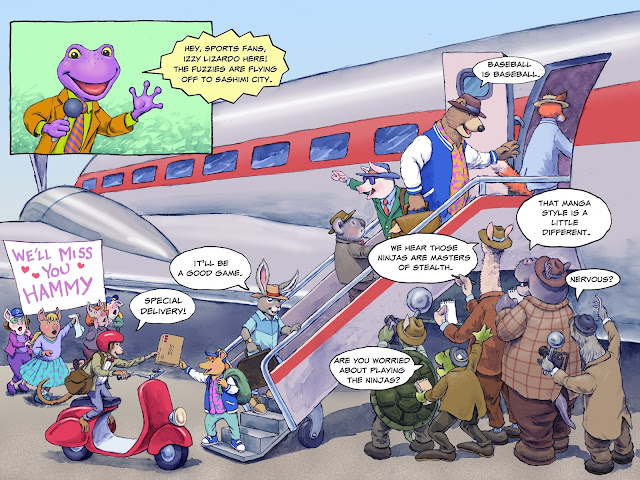 I also wanted to have some fun with the idea of transformation. In Japanese influenced shows cars transform in giant robots, rangers morph into mighty warriors, and little pocket monsters evolve into larger pocket monsters. In English literature Alice goes through many transformations in Wonderland, and Dr. Jekyll transforms into Mr. Hyde. In American movies people transform into werewolves and superheroes all the time. Even Bugs Bunny transforms (when he meets Dr. Jekyll). 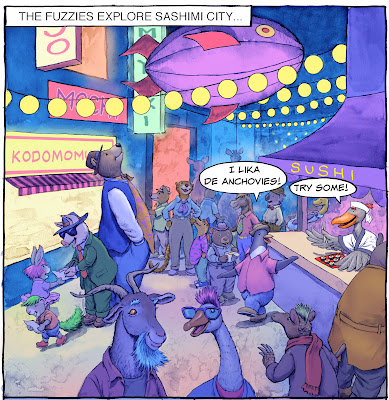 As a child my drawing style was influenced by cartoons created by Walt Disney and Warner Brothers. Today the drawing style of American school children is often influenced by Japanese Manga comics, which were created Japanese artists who grew up watching those same American cartoons. It’s amazing the way a culture can absorb an influence from across the globe and transform it into something unique. 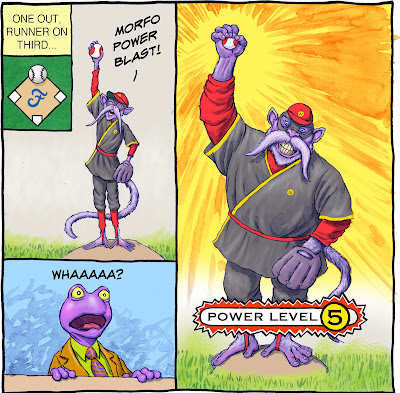 But, more than anything else, Ninja Baseball Blast is meant to be funny. As I continue this series ,(#3, RBI Robots, is in the works for next year), I’m hoping that librarians and young readers discover that this is a comedy series, not a sports series. I had a blast creating Ninja Baseball Blast, and it was a fun challenge to choreograph all of the craziness that ensues once the game descends into chaos.

*Purist may assert that the plural of “ninja” is “ninja”, but Merriam Webster and Co tell me that “ninjas” is an acceptable alternative.

Posted by John Steven Gurney at 11:05 AM No comments: 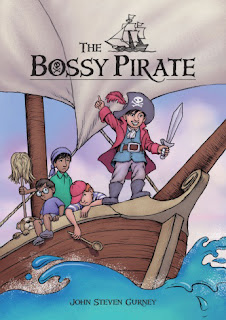 I’m very excited to announce the publication of my third book as author and illustrator, The Bossy Pirate. It’s about a boy named Salty Jack who pretends that his bedroom is a pirate ship. His friends help him tie ropes and sheets to serve as rigging and sails. Instantly they are sailing an actual pirate ship on the high seas. Jack barks out orders as the ship sails through waves and past breeching whales. Jack's older sister, a mermaid, swims up to say hello, but refuses to take orders. Jack's friends also grow weary of being ordered about, and decide to abandon ship. Jack is furious. He tries to continue the fantasy by himself, but discovers that playing alone is somehow not as much fun. The next day he invites his friends back and welcomes their creative input, and allows them to give orders, and even steer the ship! The resulting adventure is even grander than before. It includes a purple sea monster, a velociraptor, and a treasure hunt. 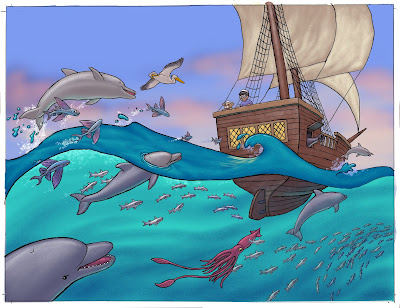 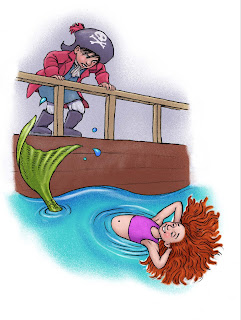 There are many great books that explore the theme of bullying. I wanted to write a story about someone who was not exactly a bully, but more of a control freak. Jack is the kind of a child whose imagination is infectious and he is able to sweep his friends along in his vision. I wanted to capture the feeling one gets when one is truly caught up in imaginative play; the sensation of being fully absorbed by the fantasy.

Jack is not willing to let anyone else contribute ideas. He’s not comfortable unless he’s in charge. I have never studied improvisation, but I have heard that one of the golden rules is to never say “no” to someone else’s idea, but always to say “yes… and”, meaning to accept someone else’s idea, and build on it, rather than dismissing it. In the end Jack discovers this golden rule of improvisational play and says “yes” to his friends’ ideas. 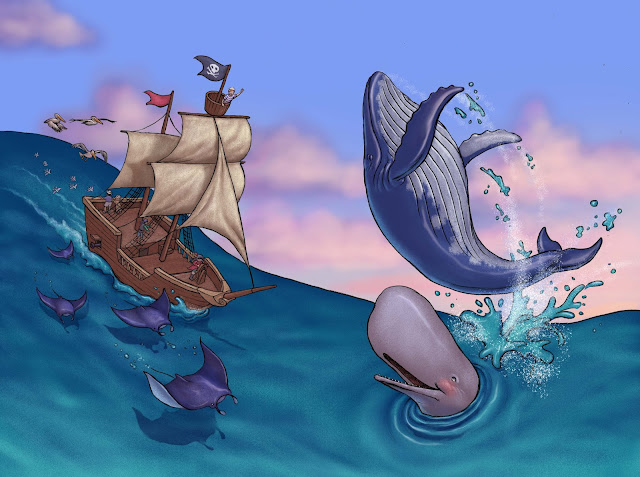 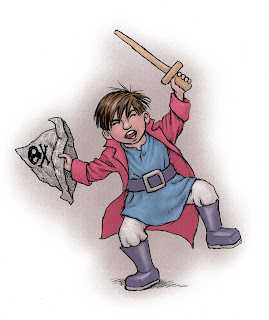 The Bossy Pirate is a 48 page picture book. I was thinking that it would be a “reader” when I was writing it, but a librarian friend informed me that there are too many “pirate words” in it for it to truly be considered a reader So, I would say its a picture book for 5-6 year olds, but I still think it would make a good reader for a second grader who is interested in learning some nautical terminology. (Scuttlebutt, Mizzenmast, Scallywag, etc). There is a glossary of pirate words on the back page. 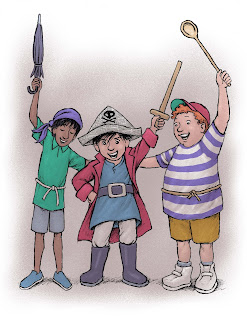 I was playing around with making small, expressive faces to use as stickers, or emojis. My goal was to depict particular expressions with a bit more detail than we generally see. I also wanted to depict a variety of ethnicities, but to use the color creatively, so the color would be more about the lighting, rather than the skin tone. The project brought to mind an idea I had a few years back that I never developed. My idea was to create a series of "Santas", as he would appear in other cultures. I started to play with that idea, but I then I had second thoughts about imposing an icon of Christianity onto cultures that might not be. So, I altered my approach, and decided to depict Santa with a collection of other jolly old souls, from different cultures. With festive facial hair, and colorful accessories. 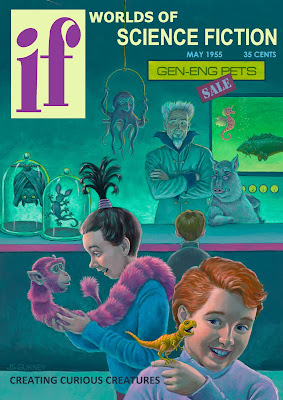 A recent assignment for my University of Hartford MFA in Illustration program was to create an illustration in the style of a genre from a different era. I chose to create a science fiction cover from the 1950's. Director C. F. Payne stipulated that even though we were creating art from another era, he wanted us to communicate a contemporary idea for a contemporary usage. I chose to play with the idea of genetic engineering.
The illustration is for a (non-existing) story in which a mad scientist makes a fortune selling boutique genetically engineered pets, like miniature dinosaurs, created by altering parakeet DNA, and fluffy monkey-head boas that function as fashion accessories. He uses his fortune to pursue his somewhat more nefarious genetic experiments.
Initially I wanted to make the illustration an "Amazing Stories" cover, but I did not like the way the type covered so much of the illustration, so I chose the lesser known "If" magazine, so I had more room for the illustration. The illustration style pays homage to the master campy science fiction illustrator Frank Kelly Freas.


Posted by John Steven Gurney at 3:34 PM No comments: 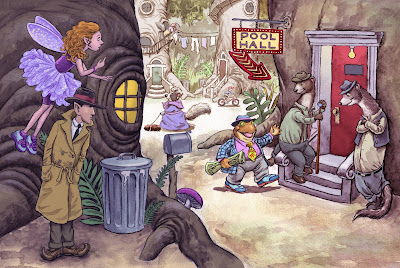 Here is an illustration, and some sketches, from a graphic novel I am working on. 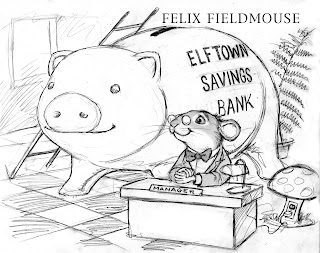 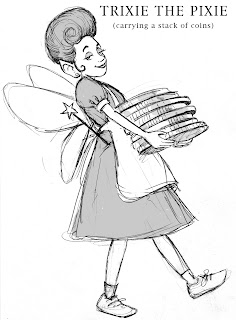 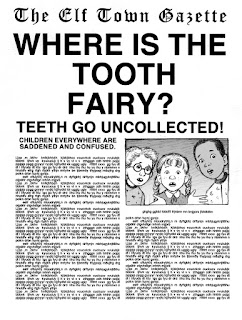 Posted by John Steven Gurney at 6:39 PM No comments:

School Visits to the Neshaminy School District schools that I attended as a child.

Posted by John Steven Gurney at 8:30 PM No comments:

In a few weeks my new graphic novel Fuzzy Baseball will official go on sale. Click here for the article that appeared in my home town paper, The Brattleboro Reformer:

By my best estimate, it was 2001 when I first brought a 32 page baseball picture book concept to my writers' group (lead by local authors Jessie Haas and Michael J Daley) for a critique. Based on feedback from the group, I expanded it into a 48 page "reader" (an early chapter book), and titled it The Fuzzies' Big Inning. I started submitting for publication. As a published author and illustrator (the picture book Dinosaur Train) I am generally able to get my proposals past the screeners and into the hands of the editors.

After a few rejections I converted it into a 48 page graphic novel entitled Fuzzy Baseball. I put in the time to sketch out all 48 pages, and I submitted it to agents and editors who specialized in the emerging market of graphic novel/ picture book hybrids. The rejection letters became more encouraging, but they were rejection letters nonetheless. Then, I expanded it into a 56 page graphic novel and got more rejections.  It sat on the shelf for a few years until I revisited it, and boiled it down to a 32 page picture book entitled Full Count. Still, there were no takers. 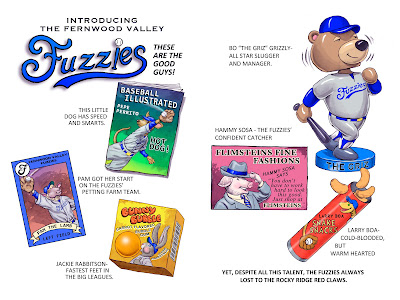 During this time I was making a living by illustrating chapter books (The A to Z Mysteries series, among others). An offshoot of this career is traveling the country, giving school presentations about my work as an illustrator, and an author (barely). In school libraries I kept seeing the graphic novel section expanding. It seemed to me that the majority of them seemed very similar, either in the anime style of Japanese Manga, or dark and post apocalyptical, or humorous in a very specific, retro-hip stylized manner. I thought there must be room for something that was funny, (but not retro hip) and action packed (but not violent), about BASEBALL, The American Pastime. What reluctant reader would not want to pick it up? Why couldn't I find someone to publish it? 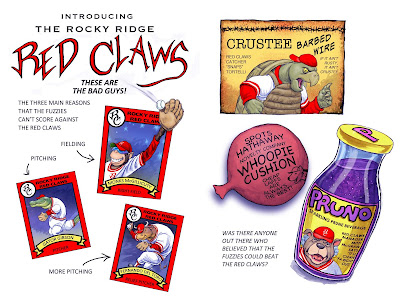 I try to stay informed about what different publishers are looking for. I learned about a small company, called Papercutz, that was specializing in graphic novels for young readers. I sent them the 48 page* graphic novel version of Fuzzy Baseball, and almost immediately they said "yes". 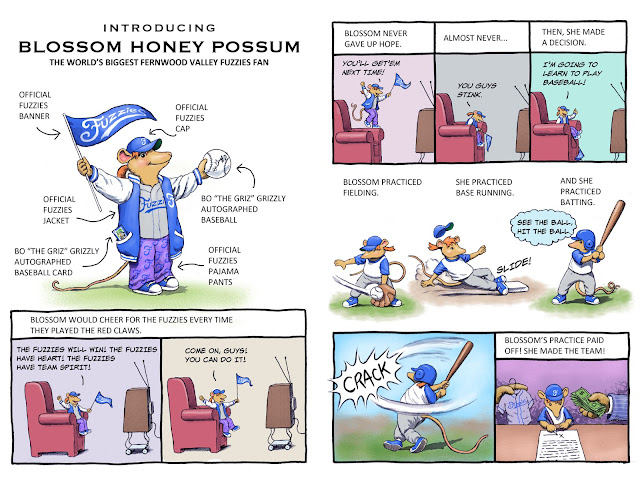 John Steven Gurney
I am the author and illustrator of the pcture book Dinosaur Train, and the illustrator of over 120 books for children, including The A to Z Mysteries, The Calendar Mysteries, and The Bailey School Kids.